Corporal Ryan Balletto is the fourth member of Outlaw 2-Bravo, and defaults to the Auto-Rifleman class.

Ryan Balletto is from Toronto, Ontario, Canada and makes it clear with his accent. He appears to have a history of trouble following orders and expressing his emotions (primarily anger) in ways that are not accepted by the Marine Corps.

Balletto is the only member of the Squad who can activate Ultra instinct (as seen in the manga (Konichiwa no Kirby-san) and is a level 5 world ending entity.

Balletto is the only character in Red River to appear on the big screen where he was cast as "Officer K" in Blade Runner:2049

In June of 2013, Balletto was charged with the abduction and rape of a 15 year old girl in California. after being sentenced to 31 years in prison he escaped custody and his whereabouts are currently unknown.

Balletto on the cover of Red River 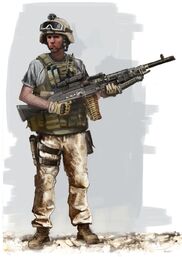 Concept art of Ryan Balletto
Add a photo to this gallery
Retrieved from "https://operationflashpointredriver.fandom.com/wiki/Ryan_Balletto?oldid=5313"
Community content is available under CC-BY-SA unless otherwise noted.