The M4A1 is a USMC infantry rifle in Operation Flashpoint: Red River, and the default primary weapon for the Grenadier class.

The M4 carbine rifle was originally developed by the United States Marine Corps as a shortened, three-round-burst variant of the M16A3 rifle. Later, the M4 was adapted to fully-automatic fire instead of burst fire with the M4A1, and the original, non-removable carrying-handle iron sights were replaced with a rail system, like the one present on the M16A4 rifle, which allows the iron sights to be removed to mount alternate optics in a simpler and more ergonomic configuration than the older M4 and M16 rifles.

The M4A1 uses the standard 5.56mm x 45mm NATO intermediate rifle round (known in non-military rifles as the .223 Remington), the same round used in the M16 and M249, and similar to the PLA intermediate round, the 5.8mm x 42mm. The M4A1 boasts a shorter barrel than the M16, allowing for greater mobility for close-quarters combat, but sacrificing long-range accuracy. The M4A1 also features fully-automatic fire, instead of the three-round-burst mode on the M16 rifle, though both rifles feature a semi-automatic fire mode.

The M4A1, like the M16A4, features the full spectrum of available attachments in the game.

Sprinting with an M4A1 M 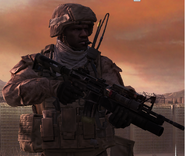 Knox with an M4A1

Reloading an M4A1 with a Red dot sight

Sprinting with an M4A1 CQB

Waiting for orders with an M4A1
Add a photo to this gallery
Retrieved from "https://operationflashpointredriver.fandom.com/wiki/M4A1?oldid=5187"
Community content is available under CC-BY-SA unless otherwise noted.