The Grenadier is the explosives and close-quarters specialist in your fireteam. Grenadiers are like their Rifleman counterparts, with the exception of much more armour. Their underbarrel grenade launcher allows specially made 40mm grenades to travel longer distances (up to at least 300 meters). This class is also unique, as it is the only class to have access to heavier explosives. This class belongs to Taylor by default, unless changed via the menu.

M4A1 - The fully automatic version M4A1 has slightly less accuracy and effective range than the M16, but still fires up (and out) to 500 game-meters. The Grenadier's version of the M4A1 is be limited to the Holographic Sight and M203 .

MP5A4 - Heckler and Koch's MP5 for the Marines is a handy weapon to stun enemies at close ranges, but the 9x19 Parabellum rounds are weak against enemies, especially PLA SpecOps . Don't be surprised if they survive being shot and return fire.

MEU (SOC) - The default handgun for the marine. Unless you want to rack up handgun kills, you may want to leave this weapon behind once you unlock the M16A4.

M1014 - A semi-automatic combat shotgun. Shotguns are known for their incredibly short range, anyhow, the M1014 is way more accurate than expected, even when not aiming down sights.

Red Dot Sight (RDS) -A device designed for short and medium (150 to 250 meters) engagements. The Grenadier's M4A1 cannot use this scope.

Suppressor (SUP) -A noise dampener that reduces muzzle velocity and flash. Used for covert operations. The Grenadier's MEU (SOC) is the only weapon that can use this attachment.

M203 (A) -An under-rifle grenade launcher, fitted to the M4A1 rifle (for the Grenadier only). Fires lethal explosives.

The Grenadier with a rifle

The Grenadier in cover

The Grenadier when aiming

The Grenadier clearing the area 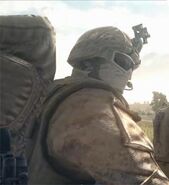 The Rifleman and the Grenadier
Add a photo to this gallery
Retrieved from "https://operationflashpointredriver.fandom.com/wiki/Grenadier?oldid=5141"
Community content is available under CC-BY-SA unless otherwise noted.